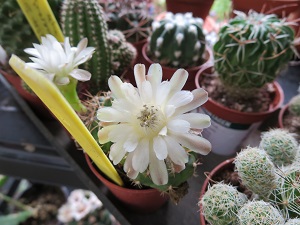 G. anisitsii; This is a solitary or clustering species, growing shortly columnar in time, and noted for its flexuous, twisting spines. It makes a stem to about 8 cm wide, and to about 10 cm or more in time, with a pale green body colour with reddish tinges. There are about 11 ribs with acute tubercles. Spines are nearly always all radial, numbering 5 to 7, yellowish to brownish, slender, tortuous, variable in length from 1 to 6 cm. There is an occasional, similar central spine. Flowers are about 4 cm long, somewhat funnel shaped, white, greenish outside, anthers grey. Fruit is red, long cylindrical, 2.5 cm long, 1 cm wide.Reported from Paraguay, Rio Tigatigami, between Concepcion and Rio Paraguay. Collectors’ numbers referred here are KK 651; A 2.According to the newly published CITES Cactaceae Checklist, after advice on this genus from Detlev Metzing of Germany, Massimo Meregalli of Italy and Geoftrey Swales of the UK, this species is taken now to embrace the later described G. damsii, the type of which was reported from Paraguay. Later collections of G. damsii in Bolivia (and these are those commonly seen nowadays in collections labelled as G. damsii with various varietal suffixes) are regarded as good subspecies of G. anisitsii, although all Backeberg’s varietal level names are invalid. The combination is not anticipated herein. See also G. damsii. 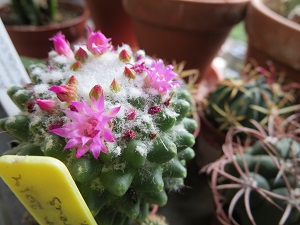